Workshops highlight the role floating plastics at sea play in carrying other pollutants, like chemicals or bacteria 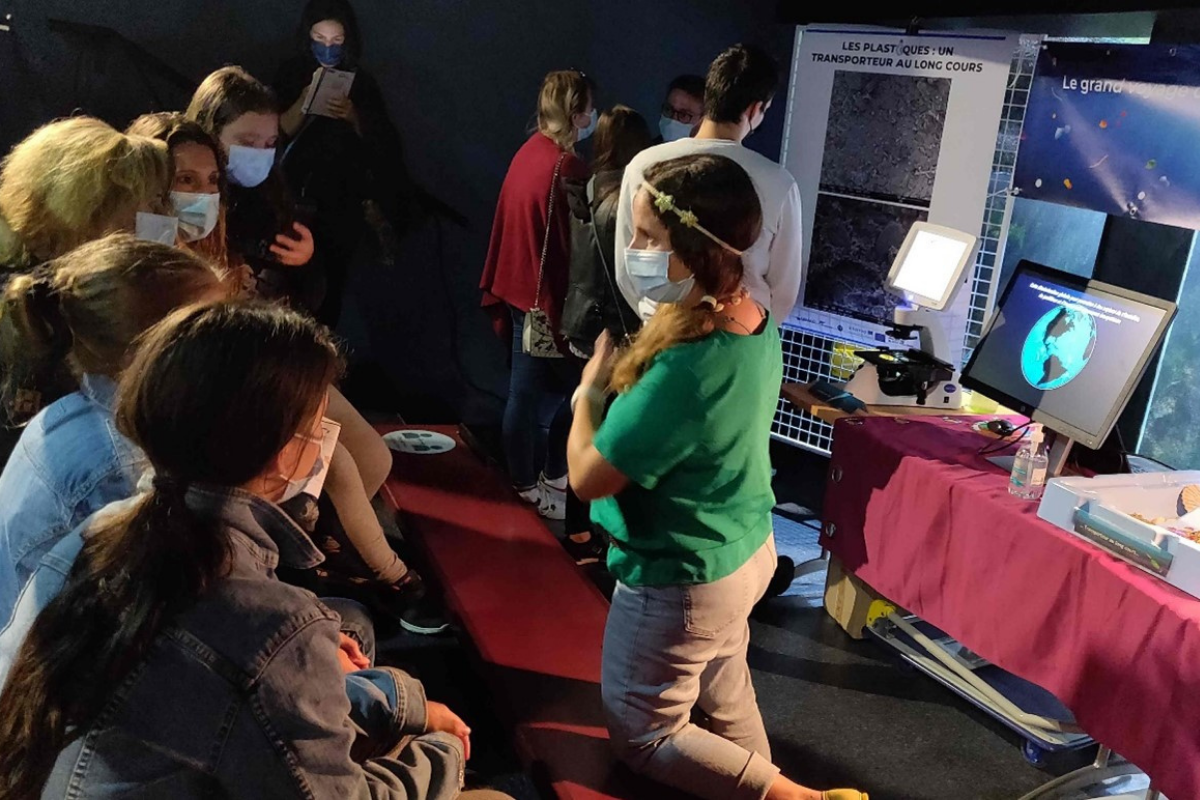 Plastic pollution is a problem in and of itself but can also impact on other types of pollution by providing a ‘vessel’ for pollutants like chemicals or live bacteria to travel through our water environments. The workshops, created by partners IFREMER and CNRS (who both work within the LEMAR) illustrate the ability of floating plastics at sea to transport live or chemical elements, which are potentially toxic or pathogenic, and show some of the ways participants could prevent plastic pollution in the their daily lives.

Plastic debris acting as a ‘carrier’ is a real concern to the world of research as it could result in the arrival of invasive species, emerging diseases, toxicity accumulated in the food chain, etc. and further raises the need and benefits to reducing our plastic footprint.

Coloured and metallic pellets were chosen to represent the diversity of living microorganisms capable of colonising submerged surfaces (biofouling), and chemical contaminants present in sea water, such as PAHs (Polycyclic Aromatic Hydrocarbons: benzopyrene, fluoranthene…) .  They are placed in a tank, which is set up to represent a coastal area (sand, shells) and the ocean (lighthouse).

A magnet representing a plastic particle floating on the surface of the ocean is moved above the tank. As the magnet is moved around, the pellets amass on its surface,  illustrating the ability of plastics to either adsorb certain pollutants, or to serve as a support for living beings (bacteria, fungi, phyto or zooplankton, larvae,etc.). 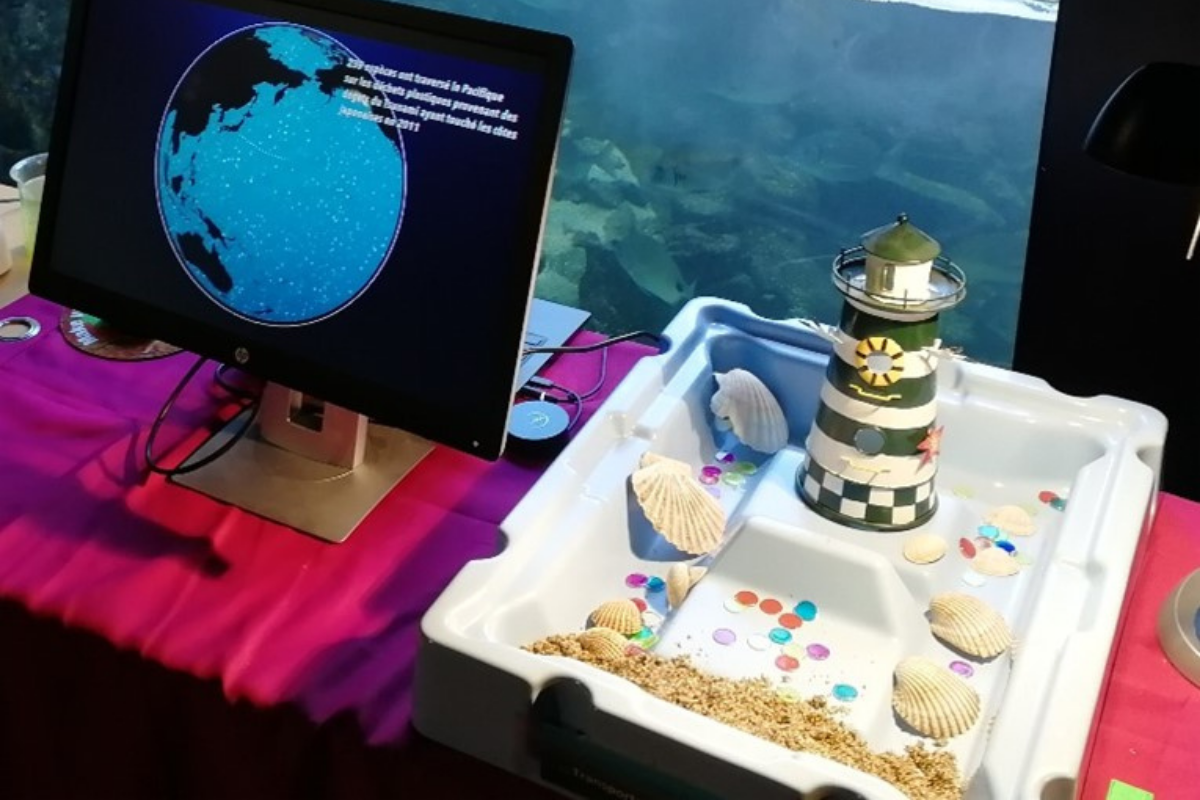 A poster showing the colonisation of the surface of a plastic cup immersed in the sea (real size and electron microscopy) makes it possible to visualise the reality of this biofouling. A video illustrating marine currents and their ability to carry floating plastic particles also help to visualise the multitude of plastic rafts floating on the surface of our oceans and the distances that these plastics can potentially travel once they reach the sea.

Workshop 2: Quiz: What do you know about plastics in the ocean?

An “interactive quiz” light board allows people to increase their knowledge of plastics in the ocean and is a great tool to initiate conversations with the visiting public on issues such as tonnage spilled per year, quantity of microplastics, and their main impacts. When a response to a question is correct, the board lights-up. The search for the right answers makes it possible to initiate a discussion with the workshop participants on plastic pollution and on some of the solutions, which can then be explored further in the final workshop. 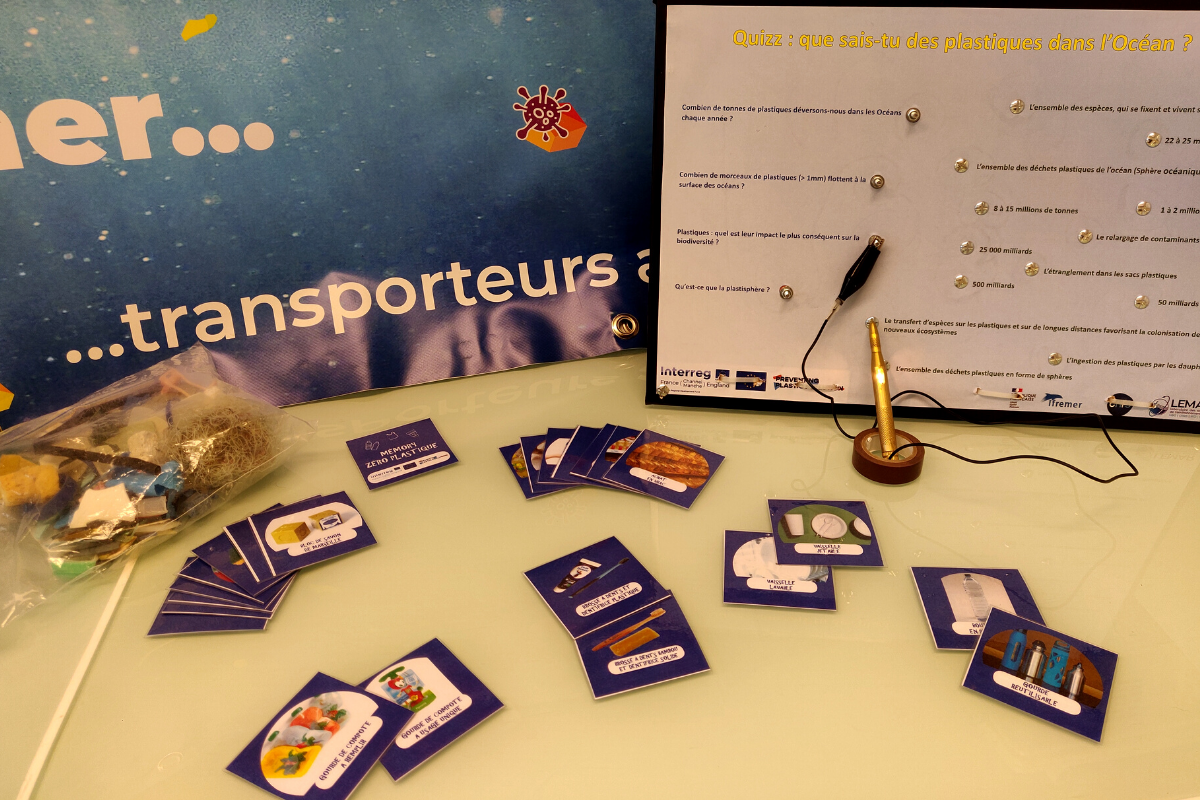 Workshop 3: Knowing how to reduce your plastic footprint

This workshop takes the shape of the popular card game: “Pairs”.  For each card representing an everyday plastic object , there is a card to represent its sustainable plastic-free alternative. The aim of the game is to successfully find each pair (e.g. single-use plastic bottle & reusable water bottle), and show that everyone has a part to play in reducing plastic and the pollution that it generates. Participants (schoolchildren and general public) became more aware of their own plastic footprint, the issues of plastic pollution , and the need for solutions to be implemented at all levels, from legislation to industrial and commercial action on plastics, down to each individual’s capacity to avoid and reduce plastic in their everyday life.