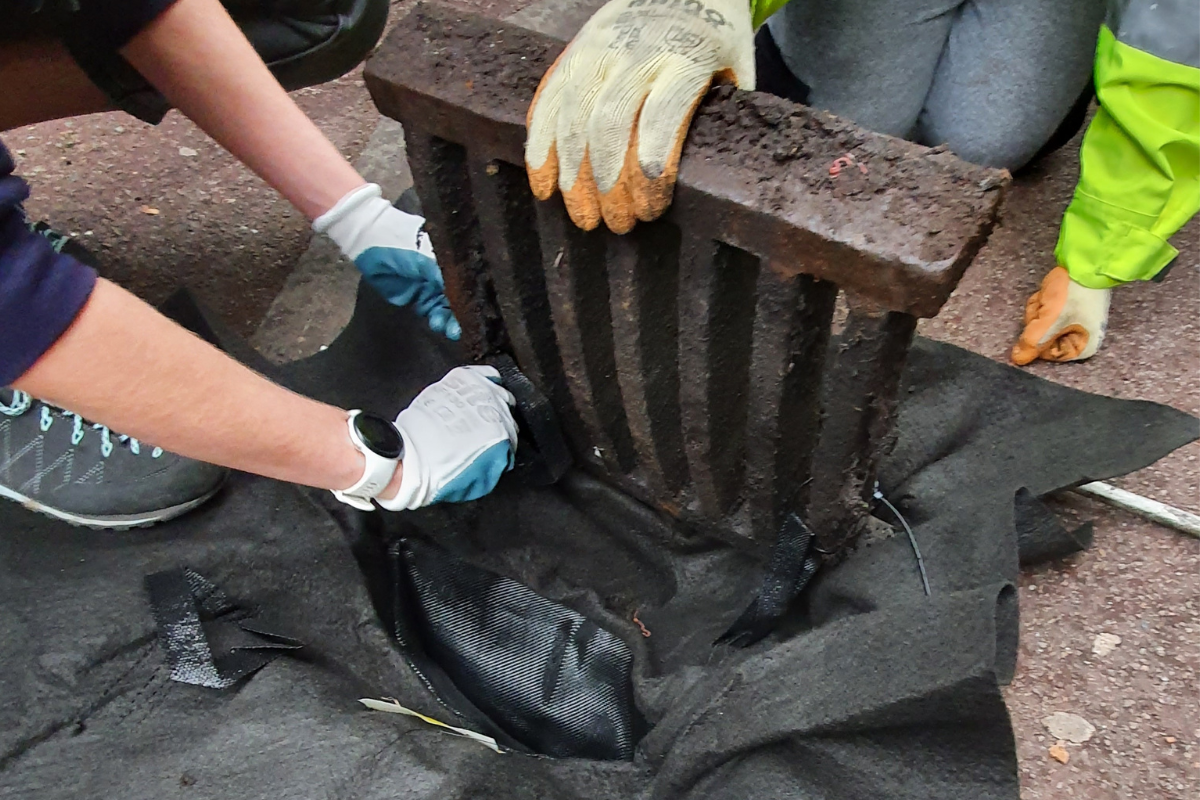 80% of marine plastic comes from a land source, often entering the marine environment via rivers. End-of-life plastics are problematic, not least because once they fall into the environment that’s generally where they stay, with marine plastic posing one of the biggest global challenges today alongside climate change.

A primary focus of the Preventing Plastic Pollution project, is investigating sources and pathways of plastic pollution in rivers. Breaking this cycle is fundamental in effecting any sort of reduction in global plastic pollution. This poses the question about how plastic gets into the environment in the first place. South East Rivers Trust (SERT) have turned their attention to storm drains to see if they could answer this question.

SERT are working in partnership with Kent County Council, Ultratech Ltd and Fosse Liquitrol, who kindly donated some drain guards to the PPP project. Aptly named ‘witches’ hats’ these drain guards are like an upside down witch’s hat designed to sit below a drain grate, suspended over the gully to catch litter that is washed in. Six of these guards have been installed around Maidstone town centre, where we are testing their efficacy in trapping plastic pollution before it enters into drainage systems and the wider river catchment. 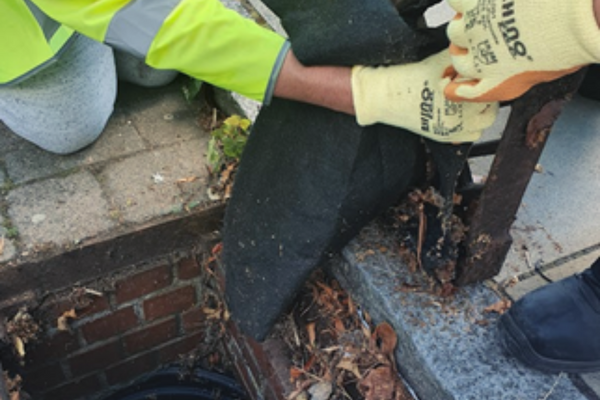 The key questions we wanted to answer:

These guards have been in place for 5 months and we are in the process of collecting and assessing the progress. Firstly the installation process of the guards was not as straightforward as hoped, because drains vary considerably in size, shape and grate type. The drain guards we used were one size, therefore not exactly the same shape as the gully. During installation, this made it difficult for the drain guard to sit flush with the side of the gully and the lip of the grate, which would ensure a seal and any debris washing in getting caught by the drain guard.

SERT performed monitoring sessions every 6-8 weeks. Over time we have found that the better fitting drain guards to the drain have stayed in place well, whereas the guards that are not the right fit have moved with the weight of the contents and, in some cases, come away from the side, meaning over time they no longer catch any plastic litter that could be washed in.

What has proved interesting is the type of litter that has been caught in the drain guards. Cigarette butts have been, by far, the most common item we found. These however have been problematic. Upon inspection of the drain guards we found small holes in multiple guards, which were due to cigarette burns. We also found that the type of litter trapped was affected by the location of the guard. For example, drain guards that were located closer to places with high footfall and social spaces such as bars, pubs and food takeaway contained more litter, whereas those located next to pedestrian walkways and car parks contained less litter.

We can, therefore, answer the initial question – Does plastic litter get washed into drains? The answer is a resounding yes. Cigarette butts, bottle tops, food wrappers, straws, receipts, sweet wrappers, chewing gum were just some of what was found during monitoring sessions of the drain guards. However, the quantity of plastic litter in some of the guards was relatively small in comparison to leaf litter and silt that was caught by the guard.

During this trial we have come across some barriers. The installation and emptying process of the guard was initially difficult as it was the first time for participating partners installing the drain guards, and time was spent making sure the drain guard fitted well to the gully.And, multiple partners were involved which required liaising with multiple different teams to initially install the drain guards. 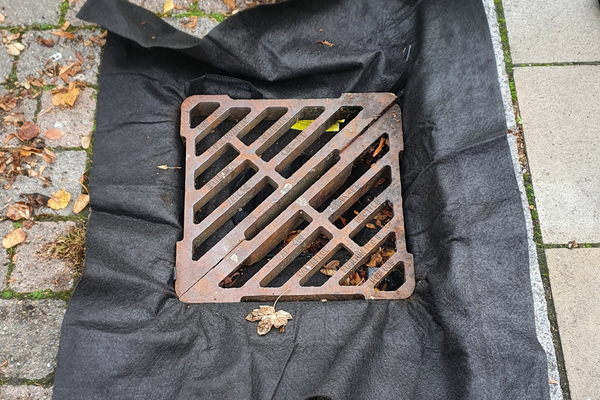 As drain sizes vary, we had to make sure that the guard fit well to the drain as best we could to avoid the base of the guard slipping. In an ideal situation we would have installed a bespoke fit of guard to each drain to ensure the guard stays in place even when under the weight of litter or rainfall to match different gully shapes such as square, rectangle or circular. As this was not possible, Ultratech donated a slightly different model that comes with a larger base that can be custom-cut to the exact size of the grate. This meant that the sides of the drain guard could be held in place with the sides of the grate creating a better seal for litter to be caught.

This new model also allowed us to address the second major obstacle: cigarette burning holes through the fabric of the drain guard. The newly installed model is made of a mesh material, which is fire resistant.

Thanks to the data gathered, stakeholders involved can raise the issue of plastic pollution in rivers with the wider public. At the same time, data and evidence, such as the items that are the most polluting, can be used to approach the government to take a more comprehensive and holistic approach to plastic litter and packaging. Local authorities can use this information to inform targeted littering interventions which will be more effective at preventing plastic litter entering into river catchments.

The trial of the drain guards continues, however we will begin to evaluate the long term feasibility of using this or a similar model for future stakeholders such as landowners, water companies and councils, who could adopt the approach to help reduce plastic litter entering river catchments. So far, the drain guards have proved effective at catching litter when they are fitted well with the drain size and shape. As the trial comes to its end and evaluation of the guards is done in more depth, it will become clearer if they are an effective way of preventing plastic pollution in rivers.